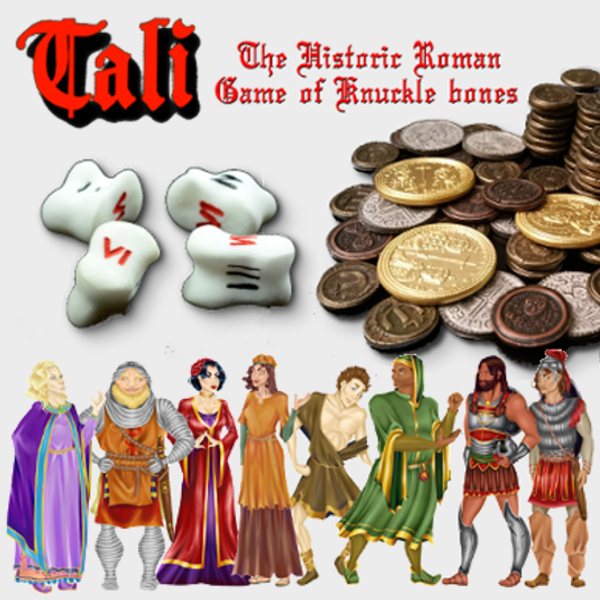 Hello everyone, We are coming up to our final 48 hours and I would like to see which stretch goals excite people more.  Please reply with which items you would like to see added to the game.  Feel free to vote for more than one but give me a priority.

Here are the choices:

We have reached a stretch goal, and have unlocked Flavia.   Flavia will now be included in the Deluxe Version of Tali.

Now to work toward $6000 and get the cards a bit more premium.

And We have crossed the funded finishing line.  I want to recognize our backers who have put us over.  Thank you the dgeberg(s).  This backer includes  Eliza and Gabriel, who along with their friend and mother played a very memorable game of Tali at Unpub in March.   Thanks to backers like them and all of you, we are now funded and working toward our stretch goals.   The many play testing sessions I have help does show that Tali is a very good game to teach about history, Roman numerals and about coin denominations (and making change) including for the younger gamers.  It is simple enough that the basic rules are grasped by the younger set while still having complexity in how to use strategy and the character powers to keep adults very engaged and amused by the optional role playing aspects.

And now onto the stretch goals.  We are starting with a new character card which will be included in the Deluxe game.  Meet Flavia Kurkua, The very charming and beautiful Flavia is from the Byzantine court of the Emperor Brothers Basil II and Constatine VIII.  Flavia is seen as good luck when she accompanies others VIPs when the Emperors or other Byzantine leaders are gambling.  This is due to the fact that when a gambler is officially with Flavia, they tend to win.  Flavia's abilities allow her to select someone else to give luck to and when they win, they must share the winnings with Flavia 50/50.