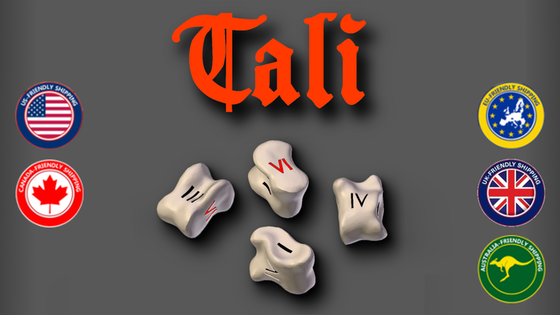 Lost Your Survey?
FAQ: Tali - Roman Knucklebones, Metal Coins, and 2 Games in One

What is meant by Micro Role-Playing game ?

Tali is two games in one, the base game attempts to re-create the historical game as the Byzantine Romans from 1000 AD would play the game.

What are the historical rules based on ?

As we at VR-Games strive to create games with realistic themes, we have created a time machine and went back to Byzantine in 1000 AD. We sent a mission of 6 agents in various costumes to play Tali in the gambling halls of the day. You may recognize the character costumes from our character cards.

I wish our research methods included a time machine as a tool, but alas we need to use historical references and archaeological papers which give us a picture of how the game may have been played. Several references that we came across give us pretty good clues to how the Emperors of Byzantine played the game as actual period writing of the various rules have been found. A small amount of filling in the blanks was necessary to make a complete game. Of course, the role-playing game rules are invented for additional enjoyment.

The number of players is listed at 2-6, but 10+ for deluxe version, how does that work ?

What Metal are the Coins Made of ?

Mostly a Zinc alloy with other metals used for color.

How Heavy are the Coins ?

How Thick are the Coins ?

Similar thickness to a US Quarter, US Nickel, US Penny, and a US Dime.

What are the Coin Denominations ?

The Swords&Sails denominations are 250 for Gold, 50 for Silver, 10 for Copper, and 1 for the Bronze (these values are for game purposes)

Historically the Gold Solidius is worth 180 of the Bronze Follis coins (or 40 nummi M) or 12 Silver miliaresion or 1440 of the small light bronze 5 nummi (E) These values had changed throughout the 1000 year history of Byzantium.

There are many more denominations and coin types which were minted by all the various Emperors. Essentially each Emperor remade the coins with there own images. This practice in Byzantium was copied through most of Europe, the Middle East, and Northern Africa and was a continuation of the Roman coinage system with various changes.

The basic game has 6 characters and the deluxe includes 10, but it looks like 2 of them are in both?

The metal coins are add-ons, can I get more than 1 set?

You can add an additional amount to your pledge that is equal to the coin only pledge and recieve additional coins. This is an approximation and many options will be availabe in the pledge manager to add more.

BackerKit is a service that crowdfunded project creators use to keep track of hundreds to tens of thousands of backers—from shipping details, pledge levels, preferences and quantities, whether they have paid or had their card declined, special notes, and everything in between!

The BackerKit software and support team is independent from the campaign’s project team—BackerKit does not handle the actual reward shipping. For more information about the preparation or delivery status of your rewards, please check the project's updates page.

How does BackerKit work?

After the campaign ends, the project creator will send you an email with a unique link to your survey. You can check out a walkthrough of the process here.

I never received my invitation. How do I complete the survey?

The most common reasons for not receiving a survey email is that you may be checking an email inbox different from the email address you used to sign up with Kickstarter, Indiegogo or Tilt Pro account, or it may be caught in your spam filter.

Confirm that the email address you are searching matches the email address tied to your Kickstarter, Indiegogo, or Tilt Pro account. If that doesn’t work, then try checking your spam, junk or promotions folders. You can also search for "backerkit” in your inbox.

To resend the survey to yourself, visit the project page and input the email address associated with your Kickstarter, Indiegogo or Tilt Pro account.

How do I update my shipping address?

When will my order be shipped, charged or locked?

That is handled directly by the project creator. BackerKit functions independently of the project itself, so we do not have control of their physical shipping timeline. If you want to check on the project’s status, we recommend reading over the project's updates page.

I completed the survey, but haven't received my rewards yet. When will they arrive?

As BackerKit does not actually handle any rewards or shipping, the best way to stay updated on the shipping timeline would be to check out the project's updates page.